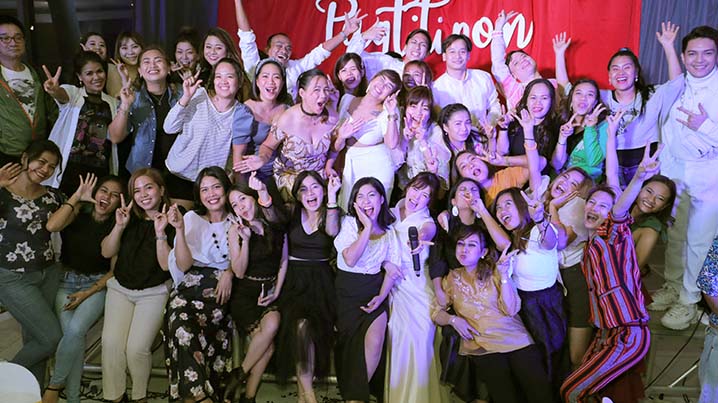 One of the best things about working with #teamKIYOSA is the company philosophy it abides by. Every morning meeting, or “chorei” in Japanese, all employees would always declare it as a reminder to follow it throughout the day as they serve the customers or work on administrative tasks and also in their personal lives.

Bi (美) is for being beautiful inside and out. This is extended to our customers who we aim to make beautiful with our services at the salon. By always serving with happiness and hospitality, not only would you feel good, it would also reflect physically. Gaku (学) is for learning constantly and improving the skills to create beautiful hair, nails and eyelashes. Last but not least, Raku (楽) reminds us to always enjoy whatever we are doing, whether in work or in life!

In honor of the hard work that everyone has put in this 2019 and to practice our philosophy of raku, Kiyosa Japanese Total Beauty staff and employees spent a night of fun, excitement, and camaraderie in the annual Christmas party and year-end celebration entitled:

Following a modern filipiniana theme, the title was inspired by the Filipino word for “gathering” describing how all the employees came together to celebrate the year of hard work. The event was kicked off by a prayer and then an opening speech by our president, Ms. Kiyosa Kato. She said that even though this year has happy and sad moments, she is glad that everyone is still motivated and shows continuous support and teamwork to each other. 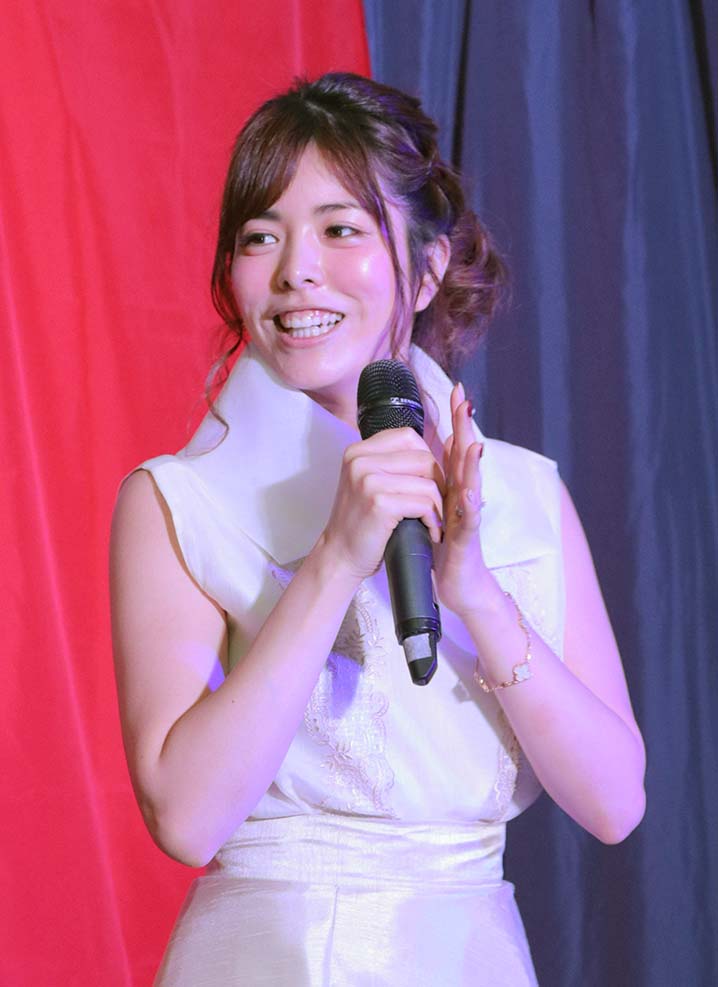 Ms. Kiyosa Kato: “For the next year let us continue to have one mind, one team, one family. We are one! KIYOSA FAMILY ”

After the uplifting opening speech, a toast was made to honor each guests and everyone who made the event possible. Then of course, it was time to eat! The food and drinks were provided by Osio’s catering. More about them at the end of this blog post.

While the guests are enjoying their meals, the best dressed of the night were called on stage to strut and pose to showcase their outfits. Following the theme, each of them had different takes on a filipiniana inspired look. 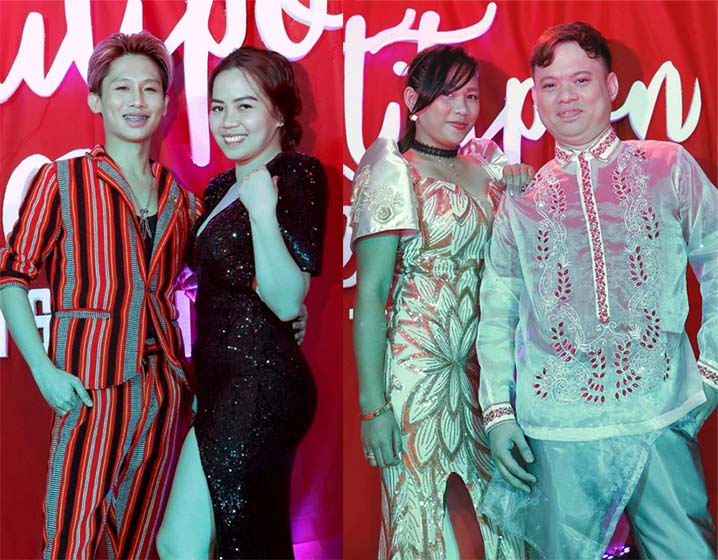 Two pairs from the salon staff were chosen because of their unique and fabulous outfits! For the male category, our hairstylists Jhon and Efren poured their creativity in coming up with a modern take on the barong. For the female category, eyelash designer Aisa and receptionist Eli looked glamorous in their filipinianas.

By tradition, each year all employees are divided into teams and they are asked to come up with a group presentation and the winner will be receiving P20,000 as cash prize. Everyone came up with their own concept performance and practiced hard (after salon operations, of course!) This really shows how motivated and dedicated our staff is — even our Japanese directors joined!

The first group to perform consisted of eyelash designer Glaiza, hairstylists Joanne, Tes and Crissy, receptionists Jec, Lyca and Janeth, and they are joined by Japanese Eyelash Director Nana and Japanese Hair Director Sumiko. They performed a tribal dance number using traditional Filipino items like the “bilao” and “pamaypay” but with a twist ending! All other staff members were pleasantly surprised to see this group dance modern hiphop as well. 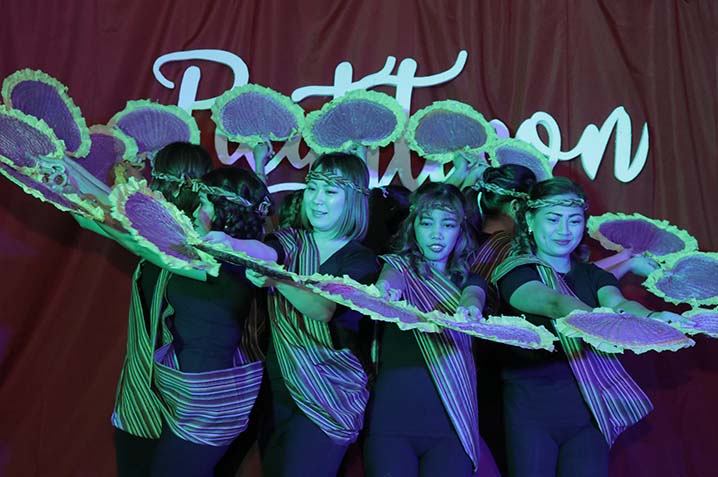 The second group consisted of eyelash designers Dina and Aisa, hairstylists Jaja, Efren and Hide, nail technician Lhet, receptionist Aiza and Eli along with Japanese Hair Director Hiro and Japanese Nail Director Yumi. They performed the traditional Filipino dance, tinikling. It is one of the most difficult Philippine dances because it involves being in perfect rhythm and coordination, otherwise, your foot might get stuck between the bamboo poles! 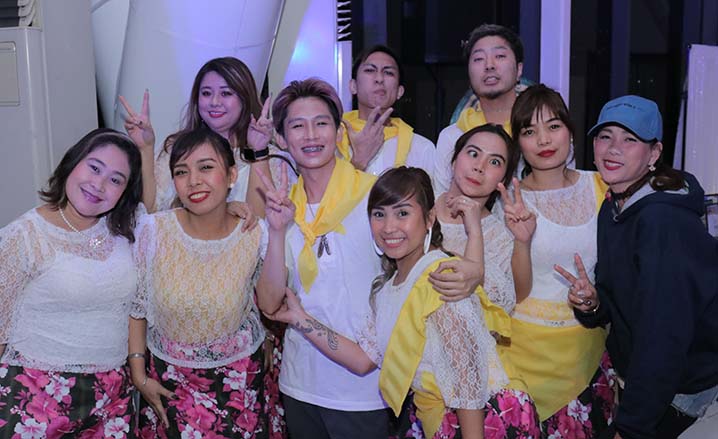 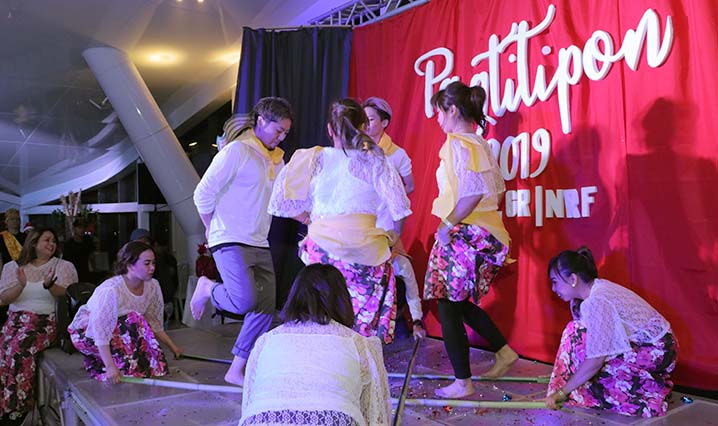 The third group consisted of eyelash designers Flor, Ivy and Amy, hairstylists Jhon and Gegie, nail technicians Cris, Jennifer and Emily with our Japanese Eyelash Director Hitomi and Japanese Nail Director Maiko. Like the first group, they performed a mix of Philippine folk dance specifically inspired by the “pagapir” or fan dance from Mindanao along with a modern Christmas dance. 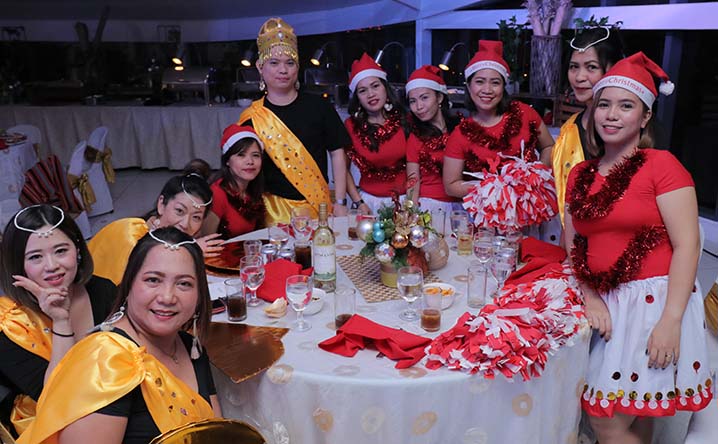 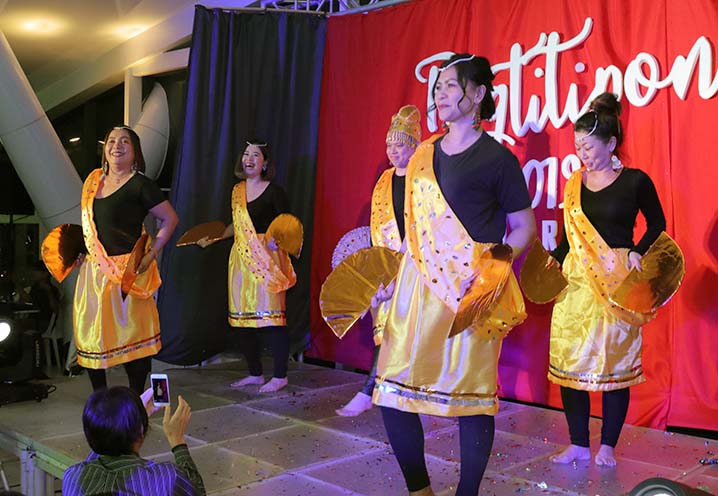 Last but not least, our back office staff joined the fun as well! To stand out from the other performances, they performed a Japanese inspired performance as opposed to the previous groups which was mostly inspired by Philippine folk dances. They danced to a medley of popular Japanese songs which our VIPs really appreciated. 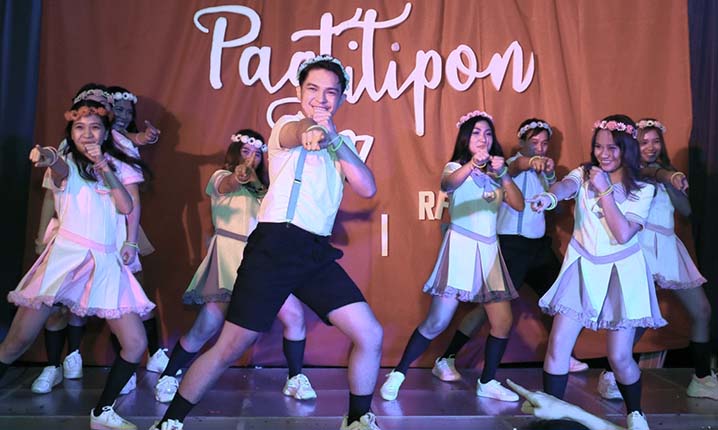 These performances just proved that the staff of Kiyosa Japanese Total Beauty will do everything in their power and have coordination and teamwork to achieve their goal: success! Everyone did their best and had fun in the process.

In the spirit of giving and gratitude, all the Japanese staff each gave their contributions which was used for the raffle prizes. Ms. Sachie Ogawa, who is a loyal and beloved customer at Kiyosa salon in BGC and also the CEO of Canmake Cosmetics contributed makeup gifts as well. Lucky employees received various household items such as electric kettles, irons, gas stoves, rice cookers, electric fans, coffee makers, microwave ovens and turbo broiler. Gadgets such as instax cameras, cellphones, flat screen TVs and tablets were included in the raffle, too. The grand prize was was a washing machine and a flat screen TV worth P10,000! All these to show the Japanese Directors’ appreciation to their respective teams for the hard work throughout the year. Of course, it would not have been complete without the Filipino staple in christmas parties: noche buena packs! 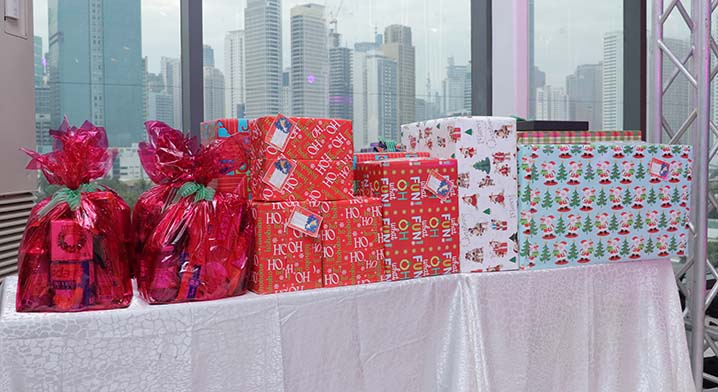 After the performances and raffle, Ms. Kiyosa returned on stage to present the salon’s accomplishments and memories throughout the year. Everyone reminisced this year’s bonding activities through the slideshow of photos and laughed at the candid photos taken during our company outing. Our celebrity clients were also featured and introduced Ms. Sam Pinto as Kiyosa Japanese Total Beauty’s brand ambassador!

Future plans for the expansion of Kiyosa Japanese Total Beauty were also presented such as franchising plans and the future branch in Makati which is targeting to open in early 2020.

After the video presentation, it was time to recognize and reward the top performing staff for this year starting with the back office staff.

The person who appeared like a comet, changed the company and made a leap! Despite being one of the newest members of Kiyosa Japanese Total Beauty, she was able to show her strength and capabilities as a leader. The General Manager, Romina, was awarded as the “Best New Staff.”

As one of the tenured office staff, she has proven her loyalty to the company and she offers her help in every way she can. She can handle any task assigned to her! Just like the root of a tree, she gives life to the back office through her knowledge and kindness. “Best Helping Hand” award was given to Jovy.

This employee has been working very hard and always gives her whole heart in every task given to her. Being one of the back office support, her contribution has been a huge part of our success. To recognize all the help she provides, the “Spotlight Award” was given to Trisha.

As the pillar of the marketing team, her excellence has brought a great impact to our SNS (social networking sites) that helps improve marketing strategy for the growth of the company. For this, the “Best Back Office” award was given to Hannah.

Salon staff were also given awards:

The “Rookie of the Year” award was given to hairstylist Jhon! When it comes to talent and skills, he did not fail to prove his potential as a future junior stylist. This year he has been training hard while giving full support to the rest of the hairstylist team. Well-deserved!

Getting the “Best Saleswoman” award two times in a row is not a coincidence! Receptionist Aiza’s smile and charming demeanor surely helps her to sell and reach goals.

Garnering the most number of staff requests among the staff, she has proven that her skills and customer relationship deserves to be recognized. The “Best Requests Award” was given to senior nail technician, Lhet. This year she also celebrated her five-year anniversary as an employee of Kiyosa Japanese Total Beauty! 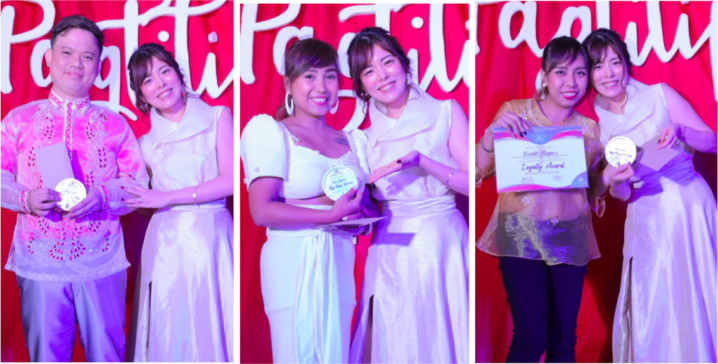 This is probably the best year for the eyelash team yet. They definitely deserve an award for contributing their skills and hard work to achieve the target sales of Kiyosa salon serving known celebrities like Sam Pinto and many more. They have been continuously giving beauty and joy to the customers by giving them a naturally gorgeous look for years. Once could say they are a huge part of the eyelash trend here in the Philippines. Not only did they one the “Best Team” award, two of them also achieved the “Best Seller” awards for this year.

For the manager category, the award was given to Japanese Eyelash Designer Hitomi. She has always been eager to reach the goals of their team and proved that she got what it takes to be a good leader of her team. Despite being an expert in eyelash extensions, she still continues to study and learn new techniques in Japan and sharing them to the Filipino staff.

Our tenured senior eyelash designer, Dina, is given the “MVP” award for being the first ever FIlipino manager for Kiyosa salon. Throughout the years, only Japanese staff are hired as managers but her skills and passion as an eyelash designer had her earn the trust of everyone, from customers to colleagues. She has been with Kiyosa salon since the beginning and with her track record, she is definitely the perfect choice to lead the team for eyelash extensions in our future branch in Makati!

To end the program, a closing speech was given by Mr. Go Kato. He expressed his thanks to those who organized the event and wished that everyone thoroughly enjoyed the program that was prepared. None of it would be possible without the hard work of each and every staff and he hopes that in the next year they will continue to be motivated and further push the limits of excellent service. 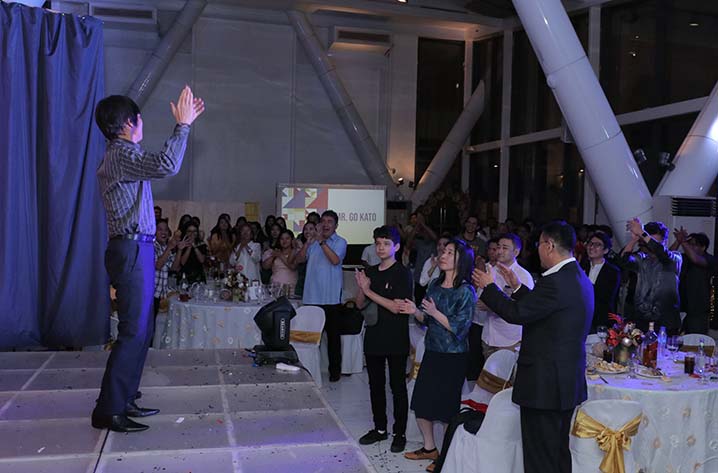 He taught everyone about a tradition in Japan for ending a celebration or gathering called sanbon-jime. To conclude the celebration, he asked everyone to stand up and do a three series of three claps followed by a single clap and repeat it three times.

HAPPY HOLIDAYS FROM KIYOSA FAMILY
To all our customers, thank you so much for trusting us with you hair, nails and eyelash extensions services! Please continue to support us as we grow and expand!

Special thank you to OSIO’S CATERING

We would like to dedicate this part of the blog post to the one who was most helpful to us during the preparation for this christmas party: Osio’s Catering. If you ever need a catering service for your wedding, christmas party, debut and other celebration, they are the one to call! 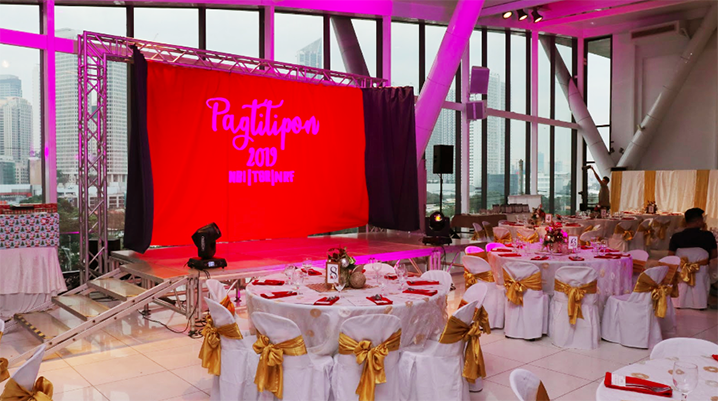 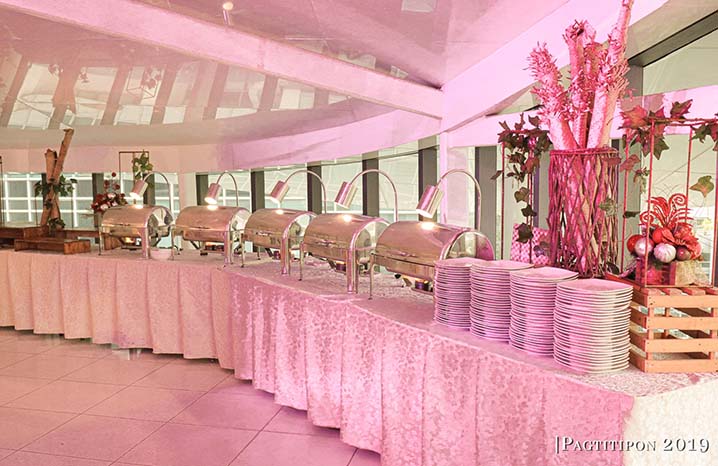 We availed their christmas party package so there is an additional puto bumbong in our menu for free! The food they provided was thoroughly enjoyed by our guests, and it also looked appetizing and pleasing to the eye because of their good decors and setup. The staff is very creative and resourceful. That was probably why they easily think of designs when they helped us make this entrance arch even though it was not included in their package! 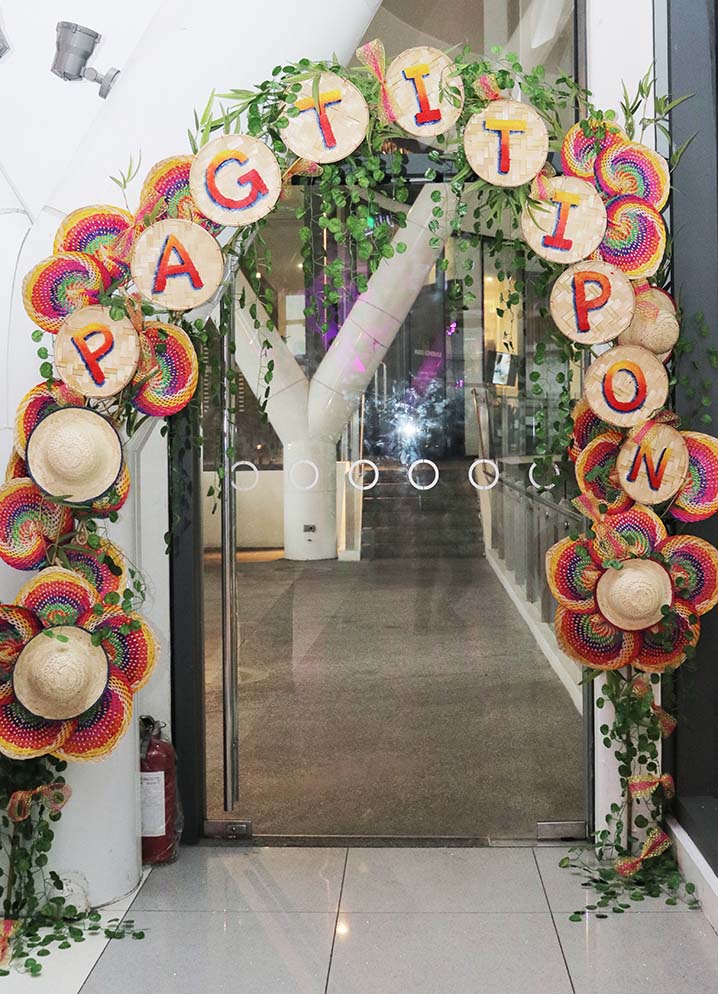 For ideas for your next celebration and party, go check their website!